Interesting fact for those who didn’t know: Flores has its very own Pig Island and it is located just off the coast of Maumere, the capital city of Sikka Regency, in Flores. Contrary to its name though, the island isn’t overflowing with pigs for you to swim with, it is called Pig Island or Pulau Babi by the locals due to its distinctive pig-like shape. The island isn’t completely deserted either, it is home to a few hundred people who live off the sea. 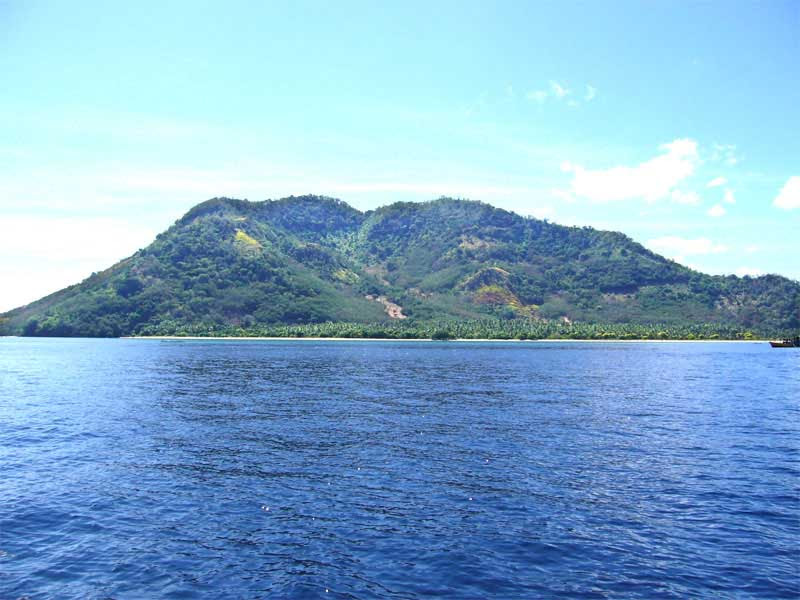 The island is open to the public. Contrary to its name, Pulau Babi is a breathtaking piece of work, with dramatic hills covered with lush vegetation, pristine white sands and beautiful clear blue water. Of late, it has become quite a destination especially for foreign travellers who enjoy snorkelling and diving. The waters are reportedly so clear, you could see right down to the reefs below! Its quiet and deserted white sandy beaches provide the ultimate castaway backdrop for those looking for a day of relaxation in the sun.

The capital city of Sikka is Maumere, with a population of about 50,000. Sikka in East Flores is one of the first places of Portuguese influence and Catholic missionary activity in Flores. It is most famous for Ikat weaving and remains one of East Flores’ most important and famous weaving centres.

Pulau Babi is less than 2.4 kilometres (1.5 mi) in diameter and is located 5 kilometres (3.1 mi) to the north of Flores. Its maximum height above sea level is 351 metres (1,152 ft). Its north end is bordered by a wide coral reef and faces the Flores Sea.
*Source: Wikipedia Photo by: Flores Tourism

The island is actually part of a chain of islands including Pulau Besar, Pulau Pangabatang, Sukun, Palu’e, Pemana Besar, and Pemana Kecil – also known as Kambing (‘goat’) Island and are reachable within 1.5 hours from Port L. Say in Maumere. As all the islands are close to each other, it is actually a perfect place for island hopping! You could also visit with the locals who live on the island who are descendants of a proud seafaring Bugis ancestral line – they will be more than happy to show you their way of life!

Due to the 1992 Tsunami, a new diving area has opened up near Pulau Babi called The Crack obviously named after the 10-metre deep crack, creating the perfect shelter for numerous fishes, eagle rays and hammerhead sharks. The current here is reported to be mild, so it doesn’t matter how experienced you are in snorkelling and diving; take a dive in The Crack, it is the perfect spot to get started and it will leave you wanting more!

Been to Pulau Babi? Want to share your photos and videos of Flores with us? Submit your videos and photos of anything Flores related, Labuan Bajo, the Komodo National Park and etcetera via our Instagram and Facebook page and stand a chance to be featured. Join us next week with FloresPlus Magazine as we Rediscover Hidden Paradise and don’t forget to tag #floresplus!