It’s almost time for the third issue of Flores Plus digital magazine, which will be available on our website this October 2017. In between our issues, we keep our readers updated daily and weekly with interesting bits of news and insights into some of Flores’s most desired locations, traditions and other points of attractions which you can readily access here, on our website and also via our Facebook page and Instagram posts.

As we continue to share more on this captivating island, we get plenty of questions, which goes along the lines of, “Where is Labuan Bajo? Is that near the Komodo National Park? How far is Labuan Bajo from Ende? Where is Komodo Island and is it the only place where we can see the Komodo Dragons?”

So today we’d like to revisit some pertinent information on the island which we hope will give you a clearer idea of its captivating geography and lay of the land. 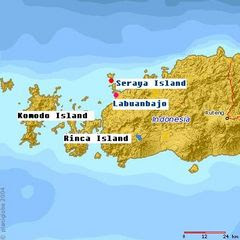 Labuan Bajo is located in the West of Flores. The island itself stretches 360km from West to East.

The Komodo National Park meanwhile, is a group of smaller islands located off the mainland of West Flores and covers a total area of 1733 km2 and includes Komodo Island, Rinca Island, Padar Island and Seraya Island as well as 26 other smaller islands.

A UNESCO World Heritage Site, the Park is not only home to the Komodo Dragon; many other notable species seek refuge here including the orange-footed scrub fowl, endemic rat and the Timor deer.

The waters surrounding the Komodo National Park is one of the richest marine environments on earth. Thanks to its location, the park is part of the Coral Triangle and is home to over 1000 species of fish, 350 species of reef-building coral and 70 species of sponges as well as dugongs, sharks, manta rays, whales, dolphins and sea turtles.

As for the Komodo Dragons, you can find them on Komodo Island and on Rinca Island – both located within the Komodo National Park.

Flores From East To West

Explorers and travel enthusiasts would already know by now that Flores is so much more than its Komodo Dragons and the Kelimutu in Ende. With a long and colourful history, vibrant languages, culture and traditions, this expansive land that spans over 8 main regencies that await further discoveries.

Flores from East to West is 360km of untamed land. Find out more on what lies in between here.

We hope that this has been useful to you on your upcoming travels. To find out more on Flores’s fascinating districts, click here and do leave a comment on our Facebook page and Instagram account to let us know what you think. Join us next week as we Rediscover Hidden Paradise and be sure to tag #floresplus to be featured!