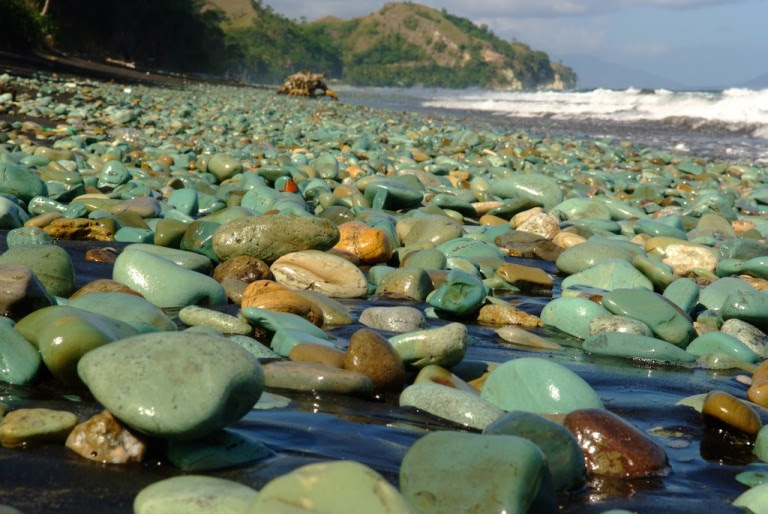 But Flores has more secrets waiting to be discovered; here’s another one to add to the list – the Blue Stone Beach.

On your travels to Flores, Blue Stone Beach in Ende should definitely be on your list. The beach is almost entirely composed out of turquoise, blue and reddish stones, and is an absolute treat for the eyes and for the photo camera.

The capital city of Ende Regency is Ende, which is located on the Southern Coast of Flores. With a population of about 60,000, it has its own university and hospitals. In the 18th century, the city was the seat of a kingdom and is also home to the world-renowned, popular tourists’ attraction, Mount Kelimutu as well as the house of Indonesia’s first President, which has been turned into a museum called The Bung Karno Museum.

Ende Beach is also worth a visit, with clear water, breathtaking panorama and a wide strip of black sand. Ende’s airport is the H. Hasan Aroeboesman Airport, located on a wide expanse behind a green mountain that gives visitors a dazzling view of Ende as the aircraft land. Another popular way of reaching Ende is overland from Labuan Bajo, in the district of Manggarai. 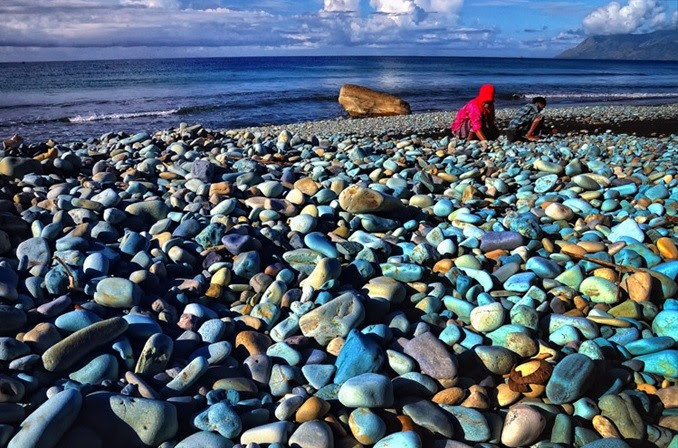 Known to the locals as Penggajawa Beach, the Blue Stone Beach is located in West Ende. The beach is actually a long stretch of sandy beach that is covered with thousands of blue stones! Occasionally you’ll find a pink or a red stone amongst all the blue. The beach is surrounded by cliffs which are of a similar colour to the stones. Photo Courtesy of Top Indonesia Holidays

These blue stones are a source of income for the local people. They will gather the stones and sort them by shape, colour and size and then sell them to buyers and travellers. The story goes that these stones were actually swept off the ocean’s floor by the waves until they land on the shore.

You can reach the Blue Stone Beach overland from Bajawa, which would only take you 40 minutes maximum. The drive would take you along for 25-kilometres along a scenic route. You will come across some green canyons, black sandy beaches and traditional villages.

Want to share your photos and videos of Flores with us? Submit your videos and photos of Labuan Bajo, the Komodo National Park and Flores via our Instagram and Facebook page and stand a chance to be featured. Join us next week with FloresPlus Magazine as we Rediscover Hidden Paradise and don’t forget to tag #floresplus!